The main goal for the fist day of flying is to get to the state of Alaska.

Originally, we had considered starting from the Seattle area, and Boeing Field, in particular. The reason for this was two-fold. On the one hand, we could shave almost two hours off the first day of flying, and on the other, we have friends in that area that we'd love to spend time with.

Ultimately, I had a work obligation that will be longer than expected, and I won't be able to come come until a day later than expected. Also, Katie and Emma had considered coming with me on that trip. Had that been the case, we'd have flown up to Seattle, left the plane there, and flown to the work trip from SEA.

Anyway, as it happens, we're flying all the way to Alaska from Corvallis (CVO) in one day. This is just-under 5 hours of flying, which is less than we've done in the past. For example, the flight from Chandler, AZ to Corvallis is six-and-a-half hours. Emma was a champ during this flight, but the last hour was hard on her. Given that this day of flight will be more than an hour shorter than that was, I'm confident that she'll be more than capable of this one as well.

We've decided that we can do this trip in one day, with one stop for fuel and lunch.

It's a bit annoying that we'll have to clear customs twice in one day, once in Canada, and once in Alaska, but that's part of the fun, isn't it? 😆

I've read a few other trip reports, and it seemed like Port Hardy, on the northern-most part of Victoria island is a popular stopping point. As it happens, it's a very convenient stopping point for us, as well. Almost perfectly splitting the journey.

Once we've filled our bellies and our plane, we'll continue on to Ketchikan. This is a relatively short 2 hour flight, and should be a nice way to end the day.

Port Hardy has a cafe on the field, and it looks like a good option. However, it appears that it's cash-only, and doesn't have an ATM, so we'll need to figure out how to get some Canadian currency before flying up.

There is 100LL fuel reported on the field, according to the Canadian Flight Supplement, but, as mentioned in the FAA Flying to Alaska document, it's wise to call ahead and check on fuel status prior to departure.

Between Corvallis and Port Hardy we can get almost all the way there on V495, but switching to V165 at Newberg (UBG) is a bit of a short-cut, and I'm planning on re-joining V495 at DIGGN, which is near the North East corner of the Olympic Peninsula. From there, we'll track V440 to Port Hardy. The highest MEA along this route is 9,600' near the mid-point of Victoria island, and I'm flight planning for cruise at 10,000'. From Port Hardy to Ketchikan is a short enough, and remote enough, flight that there's no real point to worrying about airways, so we filed point-to-point. The path is from YJQ, PR, ANN, and finally PAKT. The highest MEA on this trip is 7000', and I'll fly it at 10,000'. 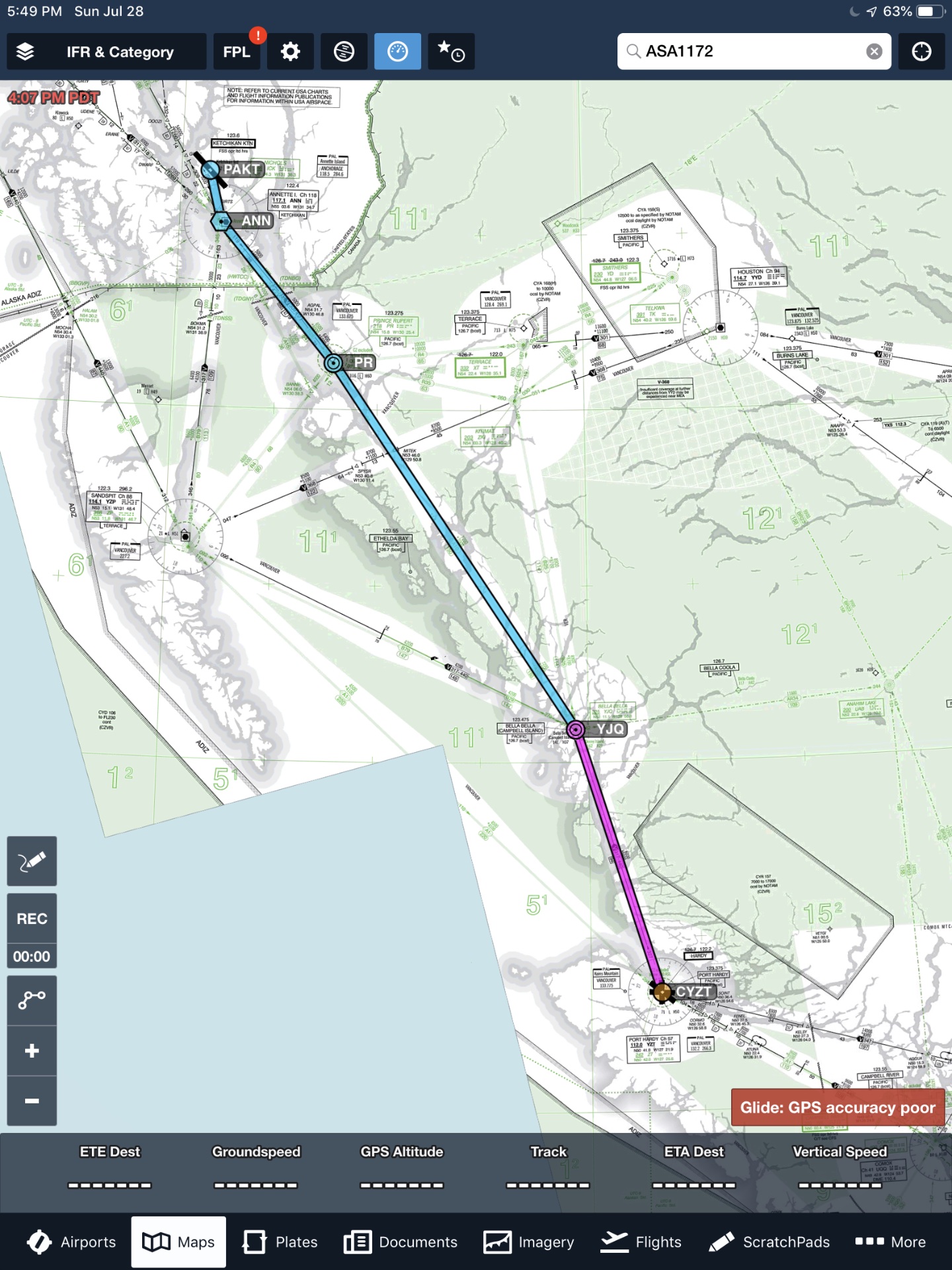