I've been making my own PCBs for almost a decade, now. I started with the Gootee method of toner transfer and a clothes iron. This served me well for some time, but it was inconsistent, error prone, and a ton of work. Recently, I've been trying to make boards with narrower pitch and finer traces (o.5mm pitch and 8mil traces), and it wasn't cutting it. Also, I've seen peoples results online that have been impressive.I decided it was time to get with the times and update my system.

Many prominent hackers have gone the photoresist method, for example Quinn Dunki (blondihacks). She achieves very impressive results (particularly in the dimension of her spaces: 5 mils).I'm not sure if it's a limitation of her process, or simply that her example only goes down to 16 mil trace width. If you are intending to use .05 mm pitch components, 8 mil trace width is really the minimum. The most impressive part of her process is the surface finish of the etched copper.

At the moment, I'm not interested in switching my entire system over from toner transfer. So, I went looking for a few concrete ways to improve my PCBs.I decided to start with a laminator, for a few reasons. First of all, with a clothes iron, it's very difficult to get consistent heat and pressure. I've had times where all of the toner on the board transferred, except for a small area that I missed for some reason. Other times, I've pressed the iron too hard and smeared the toner, destroying the pattern. After a ton of research, I found that there was a brand that everyone used five or so years ago. People modded it to run hotter by replacing the thermostat. That model of laminator wasn't available any more, and I didn't really feel like making a (what looked like poorly made) laminator run hotter. In the mean time, a laminator called Apache came on the market. This machine was endorsed by PCB Fab in aBox for toner transfer. It has the advantage of being digitally temperature controlled, so no mods are necessary, and I can still use it as a normal laminator. 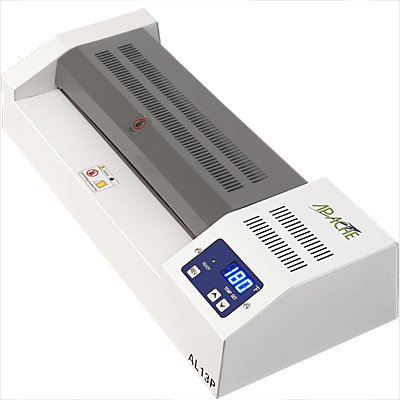 When you do toner transfer, you have to use a ceramic-covered paper. The idea is that the toner won't soak into the smooth coating, and when you get the paper wet you can peel it off the board. Originally, I used photo paper according to conventional knowledge at the time. Later, I switched to magazine paper, and the results ended up being about the same… Other than the enormous price difference. The magazine paper worked really well in the laminator.

Another thing that I wanted to try was using fancy-pants toner release paper. Digi-key carries the PCB Fab-in-a-box stuff, so I added the transfer sheets to an order I was doing anyway. It's $14 for 10 sheets. Not cheap, but considering that I can usually get a few boards out of a 8x10″ sheet, it's only about $0.40 per PCB. The results are about the same as the magazine method, but the release is AMAZING! Just put the PCB under water for a few seconds and the paper backing slips right off.

It's a pitty (see what I did there)

Unfortunately, the results of the etching process is just as bad as ever. The problem is that the toner is a bit too thin to really really resist the etch enough to prevent the copper from pitting. If you read Quinn's blog post about her experience with photo etching, you'll remember that she had the same problem. The difference is that it would be impossible for me to align an extra layer of toner. Even if I could, I'm sure it would be a disaster. 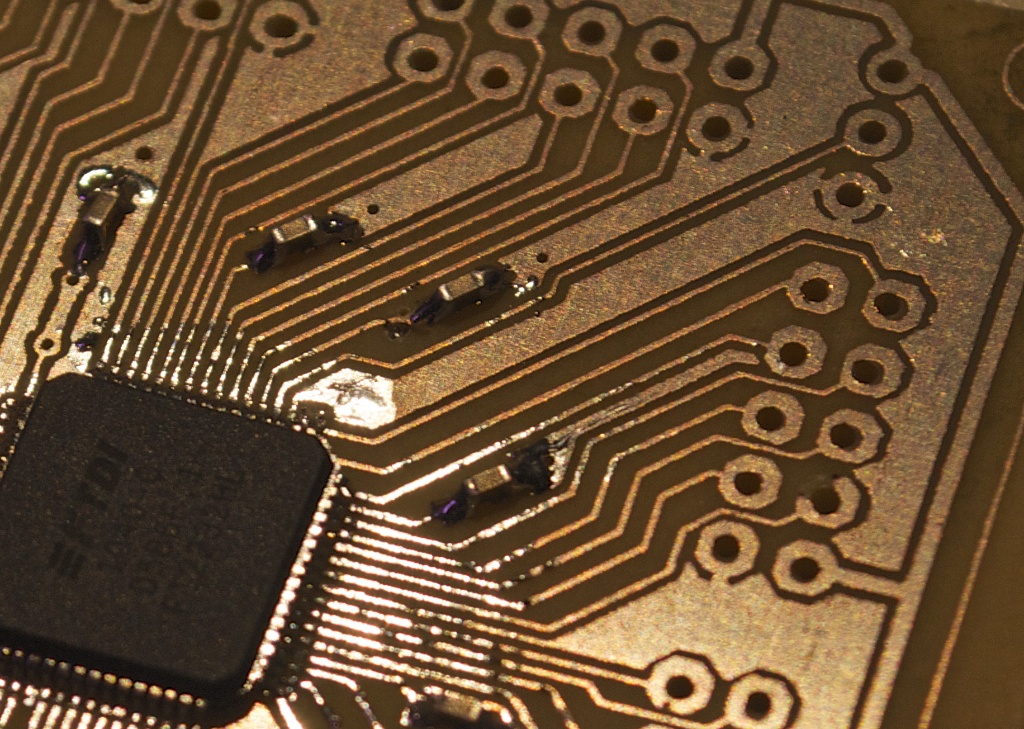 Much better (those are 0.5mm pitch traces)

it would be a disaster. I reluctantly tried the PCB Fab-in-a-box "toner reactive film." The sales pitch on it is that it will stick to the toner, provide a bit more protection, and fill in the micro holes. My impression on this product is mixed. I think it helped, but certainly not as much as promised. That said, I'm not likely to stop using it. I think the toner reactive film (TRF) is more vital than the magic paper. All that stuff, thought it isn't strictly necessary is probably worth the price.

I'm still using the same container of Ferric Chloride that I bought to etch my first board. It's probably time to replace it, but it still works.

I also use MG Chemicals "LiquidTin." It's pretty amazing how quickly the tin coating precipitates onto the copper of the boards. But, and this is a huge but, that stuff is NASTY! It probably has one of the worst smells that I've ever experienced. I know that many products caution against breathing fumes, but I wouldn't smell this one even if you paid me.

I'm still working on achieving even better results from my setup. At this point, the limiting factor of the space between spaces is that the printer merges lines that are closer together than 8 mils.