I've just finished building the first radio controlled airplane kit since, I don't know, over a decade. I tried to build one 8 yeas ago, but never finished. Anyway, It's pretty exciting. I'll share some of the building process with you. My intent from the beginning of the project was to build an arial platform for autopilot development, photography, and, perhaps, an attempt at FPV (first-person video).

With those goals in mind I decided to select a "trainer," which is a very stable plane intended for teaching new pilots. There are several advantages to a trainer in this context. In a way, I'm training an autopilot to fly, so it's a fitting. In addition, a typical trainer has a simple, boxy fuselage. I think that the simplified geometry should be easier to build around. The individual plane I settled on is the SIG Kadet LT-25, and my mom was nice enough to get it for my for christmas a few years ago.

I wanted the plane to be on the small side because I'm 100% electric for all my planes and helicopters. I don't have any investment in nitromethane power, and I don't want any. It's stinky, loud, dirty and annoying. At the same time, electric power is getting better and better. The batteries are increasingly amazing in their capacity and power. Unfortunately, I don't have any early building photos. But, I'll talk about some of the photos I do have: This is the only photo I have of the wing being built. It went together really well, the laser-cut parts are amazing. I'm not all that great at making the wing halves meet up right, but lots of epoxy and filler remedied the problem(hopefully). In this picture I haven't added the fiberglass reinforcement around the seam. Finally, notice that the servo hole is a strange shape. I added a brace in the middle of the opening because 2 micro servos are slightly more narrow than one full-sized servo. Using 2 servos allows me to make the ailerons behave as flaps as well as ailerons. This way, I can adjust the lift of the wings to compensate for the additional weight of payload packages. As I mentioned, I wanted to make it as easy as possible to add payload modules to the aircraft. To make this easier, I moved the servos for tail feathers surfaces to the tail itself. This has 2 advantages, I don't have to waste space in the radio bay, and it should offset the weight of the comically giant motor I bought. There is some additional parasitic drag, but I hope it isn't too much. Speaking of the beast, this is the comically huge motor. It's a scorpion, which claims to be better than the others because the magnets are rated to 200degrees celsius while also having the strongest magnetic field (which is apparently rare). It's rated to 80 Amps and 1200 Watts continuously. That is WAAY more than what I need for this model. I'm not sure what I was thinking when I bought it, but it is what it is. I spent some time on the motor calculator to figure out a prop/battery combination that seems appropriate to the weight of the model. Most people have theirs coming in at a finished weight of 4 pounds, so I assumed 5 pounds as a starting point and went from there. A common rule-of-thumb for electric flight is that for "reasonable" sport flying 40 to 50 Watts/Pound are necessary for brushed motors and 35 to 45 for brushless motors. In the performance results notice that the current (24 Amps) for a 3-Cell LiPo (11.1Volts) ends up with about 266 Watts and 53 Watts/Lb, which is just about right. My speed controller is rated for a 4-Cell LiPo, which would enable about 400 Watts of power. I doubt I'll need that much, but I guess it's nice to have the option. Several companies, such as APC, developed special props for electric motors. They are much more efficient than the older models. There is renewed interest in propeller design, even in the general aviation circles. One of the leaders of the movement is Paul Lipps. He has an interesting article on EAA's (experimental aircraft association) Experimenter magazine. Some qualities of his designs are also present on this propeller. As demonstrated in the photo above, the angle of attack at the root of the propeller is much greater than other model props. This caused a problem for the spinner I planned on using. I had to carve the opening larger to accommodate the prop and give some room for comfort. I skip ahead here a little, but here is a photo of the motor and speed control installed in the fuselage. At this point, the motor is just sitting there but it doesn't look any different bolted in. I later moved the speed control slightly. In the photo it's sitting above a balsa panel, I was able to move it underneath. This left plenty of room on top of the panel for the battery pack.

Top of the GPS tray

I wanted to build a place for the GPS and autopilot circuitboards. I knew thatI could install them in the radio compartment, but it would have been covered by the wing. This photo is looking through a lightening hole on the top of the fuselage, just behind the wing. I found some plastic 'U' channel and thought it would allow me to slide electronics trays into this bay. It's necessary because once the covering film is installed, I won't have access to the bay from this angle. Front view of the GPS tray

Here is another view of the GPS tray. I had to take this picture from the firewall to get the right angle. You can see the bracing I made underneath and alongside the plastic channels to add rigidity. On the bottom of the fuselage, you can see 2 balsa sticks. Those are the mount for the tailwheel steering servo. Here, the tailwheel steering servo is mounted. I decided that I could sacrifice this amount of space in the bay. I didn't want the servo to be mounted upside-down on the bottom of the plane because it's rainy in Oregon, and I didn't want water to splash up from the main gear onto the servo. I also thought that if I had a landing onto tall grass there was an increased risk of damaging the servo because there would be more places for things to get caught. The funny-looking bulge on the right is there so I can remove and install the servo. The sticks are just wide enough to fit the body of the servo, but there is a wire coming out that makes it hard to mount otherwise.You can see that the control wires rub against the side of the former. I later carved them a little to allow for clearance. As things move along, here is a photo of the plane partially covered. The entire fuselage is covered, and the top of the wing is, too. You can't really see, but the tail surfaces are covered and installed. I haven't bought the wheels at this point, either. Now, things are just about finished. I installed an eye-bolt in the top of the wing at the Center of Gravity (CG) to check the plane for lateral and longitudinal balance. Notice that there is a metal tube sticking out of the leading-edge of the right wing. I decided to install a pitot tube for use later.It's made out of aluminum and goes into a silicone tube down the length of the wing to another aluminum tube that exits out the bottom of the wing. I usedBernoulli's formula for determining air speed using a pitot tube and determined that I need to get a 1500 Pa (1.5 kPa) differential pressure sensor, assuming 50M/sec as a maximum speed (which is about 100Mph). 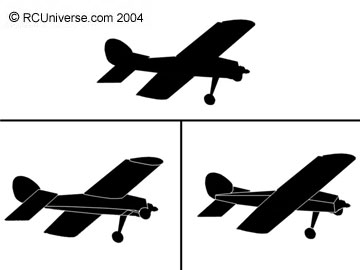 The idea is to make the 2 possible orientations of the plane look very different through the use of color. In this example, my plane would be different because the image on the bottom-left would have a stripe along the length of the wing and on the one in the bottom-right image, there would be a single diagonal stripe on the right wing Top of the plane, fully covered Bottom of the plane, fully covered

Well, long story-short, I'm done building the airframe. I need to work on the electronics now. Luckily (I'm trying to be up-beat about this) the weather is absolute shit, so I'll have plenty of time to work on it. Hopefully there will be a break that I can use to take it on it's maiden flight. All dressed up with nowhere to go.

There it is all finished. Note that the deck isn't wet because I sprayed it off. We're supposed to have "torrential" rain this weekend. 🙃