In and around Juneau

On the flight from Ketchikan to Juneau we flew along the coast and Katie saw DOZENS of whales. At first she was unsure what the little dark grayish torpedos were, but then she started seeing them blow and even saw one huge breach. We were pretty shocked just how many humpbacks could be seen at once. We hadn't booked any whale excursions on our trip, so this was particularly cool.

I don't even know where to begin with Jorgensen House. It was absolutely spectacular. The house and grounds themselves are incredibly beautiful and peaceful. We walked to and from town every day past a gorgeous park-like cemetery. Renda, our hostess, was so gracious and spoiled us endlessly, always accessible, but never obtrusive. 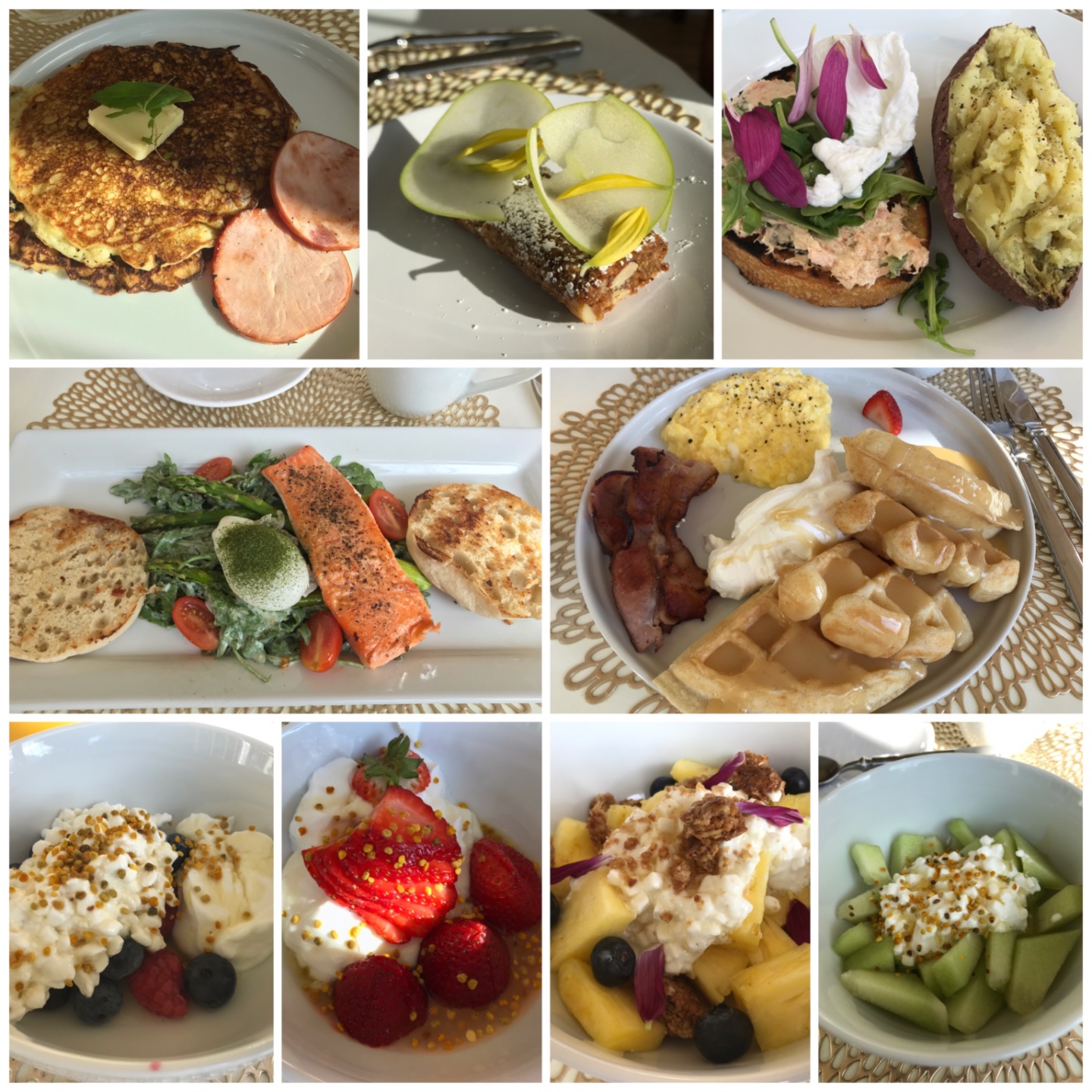 The breakfasts were out of this world ridiculously delicious. Honestly they have gourmet chefs serving breakfast and every morning they come out and tell you what they've created. We felt like royalty while staying here. We didn't tell them it was Katie's birthday, but by random happenstance, they had cake available the evening of her birthday. They also whipped a scrumptious lunch to go with zero notice when they learned we'd be flying over the lunch hour, such service!

Town was pretty clearly divided between cruise ship owned tourist crap stores and local stuff, we tried a bit of both and for the most part liked everything. First we had diner at The Hanger on the Warf which was yummy enough. We also tried the Twisted Fish (apparently the same owners) and it was also pretty good. Emma was quite pleased with the sashimi platter at Tokyo Japanese Restruant. We got Russian Dumplings for lunch one day at Pel'meni which were good and cheap. We also had a suprisingly ample lunch at Devil's Club Brewing along with two satisfying flights of beer, the people there were very nice. The best, in our opinion, was Deck Hand Dave's food truck at Gunakadeit Park. Renda tipped us off that when the Food Network folks had stayed with them they said it was the best fish tacos around. There we ordered fish tacos, fish and chips, and got some beer in the cute little food truck court, it was all very very good. The driver of our taxi from the airport gave us a quick tour of downtown Juneau, and one thing that he mentioned (that we hadn't already heard about) was that we could hike up Mount Roberts, and after buying $10 of stuff from a gift shop, ride the tram down "for free". I'm not telling you to cheat, of course, but no one checked our receipt ;) We were planning on walking downtown from our B&B to the base of the tram, and taking the tram round-trip. But, we didn't have anything planned for this day, so we thought we might try the hike. Initially, it seemed like an insane idea, but Emma was bouncing off the walls, so we decided to give it a shot. Our B&B is near the trailhead for the Gold Creek Flume trail, which links up with the Mount Roberts trailhead. By the time we hiked up the hill to get to the trailhead, we saw that it was closed until September... Booo! Undeterred, we called a taxi and got a ride to the Mount Roberts trailhead by road. We knew, of course, that hiking up a mountain was going to be challenging, and we were worried how Emma would take it, but we actually did amazingly well. Emma never complained about the hike. She said she was tired once, but it had the air of a status report, rather than a complaint. Though the hike was achievable, I had not anticipated how sweaty I'd be at the top. It was kinda jarring being sweaty and stinking while mingling around so many people from the cruises that took the tram up. The tram ride down was awesome, and it is a truly impressive incline. One of the three banner events for the trip was the Mendenhall Glacier helicopter tour and dog camp. Everything went according to plan, and the weather today was perfect. We had an easy morning, because our tour group was set to meet in downtown Juneau at 2:45. The tour company is a mill, and is run like a well oiled machine. Their facility is on the East end of the Juneau International Airport, and it's basically a small building surrounded on three sides by running helicopters. When I say running helicopters, I mean it. I don't think they shutdown all day. A flight of three comes in and lands, the people get out, it gets fueled (while running), people get in, and they leave. The whole process can't take more than 3 minutes. The flight to the glacier is about ten minutes. About half-way through your time on the glacier, you can hear the helicopters come back and swap-out another group. The formation flying that these pilots do is pretty awesome. The flight itself isn't close formation, but the takeoffs and landings are like ballet. The flight to the glacier, though short, was beautiful. I can only think of a few places on earth that would be as spectacular to see by helicopter. As we flew away from Juneau and climbed, we could see the trees thin at the timberline, then as we climbed further rock turned to ice. Flying further still, we could see the flows of ice, frozen in time. Eventually, we approached a large bowl-like feature in the rock and ice, and in the center a small formation of structures. It was like a micro-sized burning man on ice. This impression was made even stronger when we landed and were greeted by funky guys in full glacier glasses. The first guy we talked to explained the camp, and what he does there. During the winter he lives in Fairbanks with his wife and their 45 sled dogs. But, in the summer, it's too warm down there for the dogs to exercise and train properly. So, every summer they move up to the glacier and that lets them keep their dogs from going nuts due to boredom. About 22 people live at the camp at a time, and they rotate down with a few living "on the ground" at a time. Next we got to take our ride on the dogsleds. They plan on making 3-4 stops along a 1.5 mile loop so that everyone can rotate in position on the sleds. The front sled is the one that's driven by the real musher, and there's a trailer sled that looks like a normal dogsled on which each visitor can play at mushing. Even though you had no real control in the back, I got the feeling that being the real musher doesn't afford you a lot of control either. The sleds do have brakes, and I did use them a few times to avoid hitting the real musher in front. One of the times that we stopped to rotate, and also at the end, we got a chance to pet the dogs and thank them for doing a good job. It was cool to see how different their personalities were. I became enamored with one in particular that was very clear with you when she decided she wasn't done being petted. She'd either hit you with her paw or head-but you, such a sweetheart. Finally, we all got a chance to pet and snuggle with two very cute puppies. I'm certain this was Emma's favorite part of the entire vacation. This excursion was a pretty simple one. The basic idea is to get into a canoe with something like 19 other people and paddle for 5.5 miles in Mendenhall Lake. I was surprised just how exhausting that would be, and how annoying it would be to paddle behind some late-teen/early-twenty something women from Jersey who were either incredibly incompetent and/or incredibly lazy. We weren't at all sore after climbing Mt. Roberts, but our arms were a little sore after paddling the lake. Emma really wanted to try paddling, but she's just not quite strong enough yet. I helped her with it, but the angles were really hard on my arms. I have to say, she may not be a great paddler yet, but she looks great with a paddle! 😂 After going as close as we could to the glacier, we turned toward Nugget Falls. The guide had us paddle right at the falls as hard as possible, and got a pretty good splash. Emma was not impressed! That was pretty much it. We paddled back, and that was that. Then, the next day, when we were flying to Talkeetna Katie got an awesome photo of Mendenhall Lake, with the glacier and Nugget falls.