Now that we're on the ground at Ketchikan, and had some rest we got to explore the town some. It's a pretty neat little community and we enjoyed it. There were a few highlights... 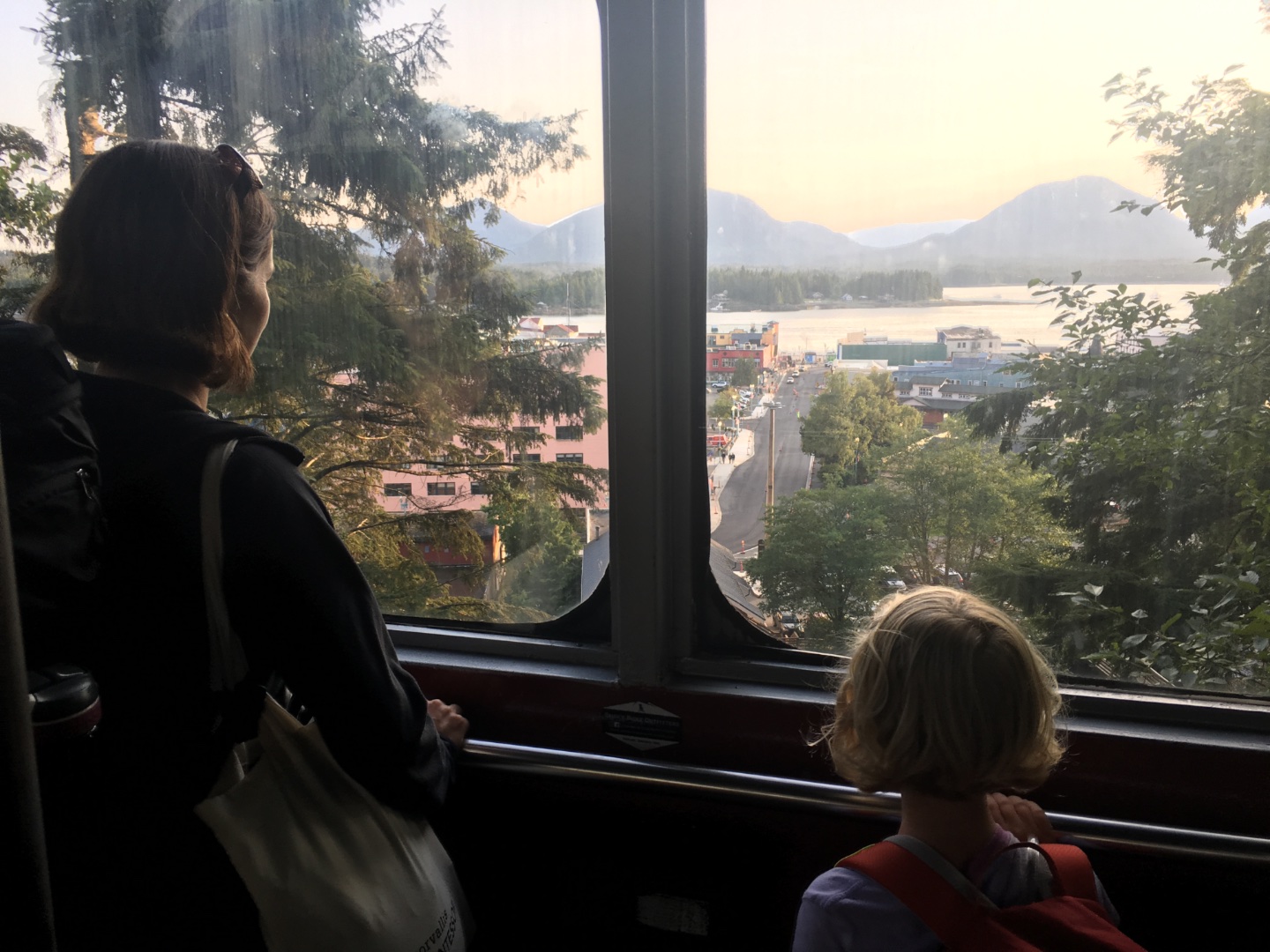 Our hotel is up on the hill overlooking Creek Street. It's a pretty steep grade at 70%, and 175' of elevation change. It would be a total bummer to have to walk it every time. Thankfully, the builders of the hotel had the good sense and foresight to build the Funicular. The upper end of it opens right into the lobby. Creek Street is the former "Red Light" district of Ketchikan. There were saloons, brothels, all that good stuff. Now, though, it's fairly typical tourist-y shops. As far as these shop walks go, though, it's pretty cute. The best part is the actual creek that runs along side it where you can see HUNDREDS of salmon at once try to make it back up stream to spawn and seals gather for an easy meal. Ketchikan has a really lovely little city park up the hill from downtown. It has a salmon hatchery, fountain, and the Totem Heritage Center. The Smithsonian, Forest Service, City of Ketchikan (and others) all worked to develop a survey of the totems in SE Alaska. They secured buy-in from the Native Alaskan Brotherhood and Sisterhood (NAB/NAS) and the owners of the totems. For totems they couldn't establish ownership, they got permission from tribal descendants. These totems were removed from where they were installed, and moved to the Center. The rational for these moves is that totems had been stolen, vandalized, or were decaying in the weather. They were carefully removed and are displayed at the center. It was very cool and inspiring to see the old totems as they were. Growing up in the Pacific Northwest (as Katie and I did) gave us the opportunity to see a ton of totem poles around, but they were all modern. These are real and old.

You know that you're going to see a lot of float planes in Alaska, but I had no idea just how many I'd see. It's honestly ridiculous. They're everywhere. Prior to coming to Alaska, I think I may have seen a De Havilland Beaver once in my life. Now I've seen probably 50. Same goes with De Havilland Otters.

For the flight to Juneau, I filed an IFR flight plan, even though the weather was more than sufficient for VFR. Especially on trips like this, I like having "someone watching me". Unfortunately, no one was for the majority of the flight. Ketchikan, like Port Hardy, has a "Mandatory Frequency" which is almost like a tower, but they do not tell you what to do. You check in with them, tell them where you are and what you're doing, and they tell you what everyone else is doing. When we checked on being ready to taxi, they just asked if we were going to be going right to the runway or stopping anywhere else (presumably for a run-up). Because we had already done all the pre-takeoff checks, we said we weren't stopping anywhere else. They told us about the Beavers in the pattern for the river, and that they had no other scheduled flights for several minutes. Finally, they reminded us that runway 11 is right-traffic. We took off, changed frequencies, and called Anchorage Center. When we called Anchorage Center, they couldn't pick us up on radar. I've had this happen before in Oregon. I'm not sure why, but my transponder just isn't that sensitive. While we were waiting to see if they'd be able to pick me up, and decide whether they were going to accept me as an IFR flight without a transponder, I went ahead and climbed up to 8,500' as a VFR hemispherical altitude.

Eventually, they cleared me for the flight, and I descended to the filed and cleared altitude of 8,000'. I had to give position reports about every 20 miles along the trip. Another thing that I have to sometimes do in remote mountainous areas such as this is get frequency changes 20-40 miles beforehand. For example, I got something like "report 20 miles prior to Level Island on my frequency 133.9". This is basically him telling me that I'm going to be out of range on my current frequency sometime between where I am and 20 miles south of LVD, and that they will use that as another point to keep track of where I am. This happened twice on this flight.

Another interesting thing that happened on today's flight is that another aircraft missed a handoff. So, Anchorage center asked me to broadcast to them their new frequency. I hadn't thought about it at the time, but me repeating the request was also broadcasting to them. I heard the other aircraft read back to me, then I heard them check-in with Anchorage. Finally Anchorage thanked me for the help. Because another IFR aircraft was going into Juneau before me, and they didn't have me on radar, I had to stay really high really late into the approach again. Luckily, I finally got close enough to a radar facility that they were able to pick me up and give me a descent. They cleared me for the visual and handed me off to Juneau tower. I was high and close enough that I had to do a 360° to lose some altitude. I did a wide downwind and had an uneventful approach to landing. I noticed while filling out my logbook that my plane has 1999.2 hours since new, and my engine has almost made it all the way to TBO. I can't wait to put the 0.8 on it soon, and hopefully get a photo of the big 2000! 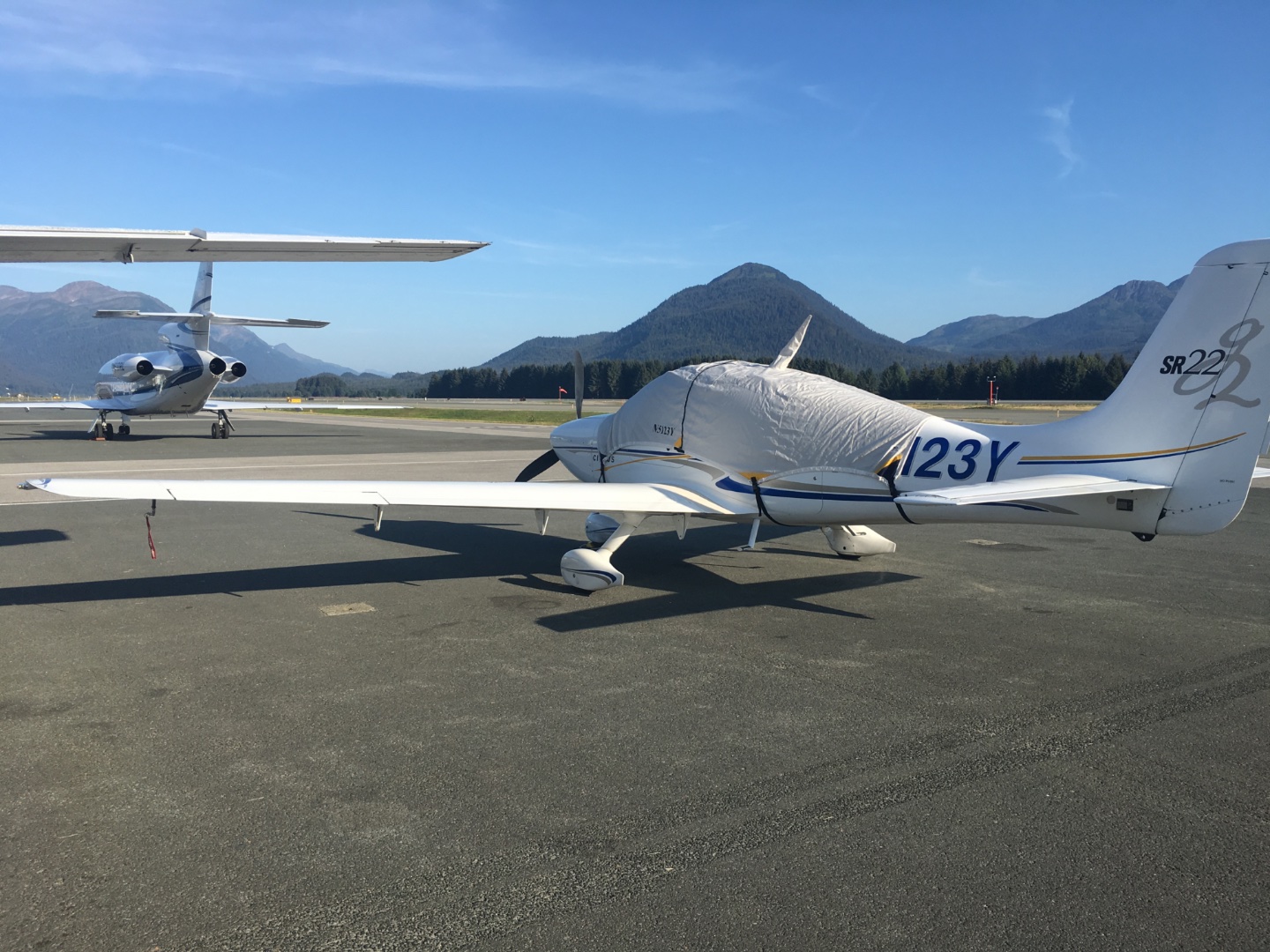